Esther Crabbendam hosts the pop culture podcast De Vierkante Ogen Show, is a campaigner for digital rights organisation Bits of Freedom and is tweeting as @ezsther and @kortschrijver (for your daily fix on tweet-length stories). Esther showed us her Internet in February. These are the images she encountered and she’d like to share with you. 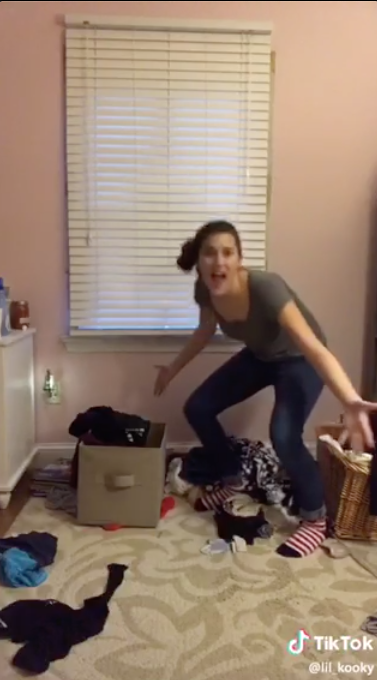 “Ever since Vine dissapeared from the internet, I miss it. Thankfully, some of the artworks have been uploaded on YouTube so we can still watch the creativity the short-video-app brought up in people. But; there is a new app in town. TikTok combines the best of music.ly and Vine and is very popular under teens. Scrolling through I discovered a meme, inspired by hiphop musical Hamilton. It perfectly shows the combination of karaoke and meme-making. ”

“When you follow artist Molly Soda on Instagram you get a peek into both her personal life and her art, which often intertwine. Growing up while the internet became a larger and larger part of our lives, she became a ‘digital DIY artist.’ Her artwork includes a 10-hour long video of herself reading Tumblr comments, a live stream of her singing karaoke on Instagram, and self-leaked nude selfies to express that women should be taking control of the way they are represented in media/art by photographing themselves.

This week she launched her newest project: Wrong Box. It’s an online game in the style of the internet of her teens. As someone who grew up during the same time (she’s from 1989, I’m from 1990) it looks, feels and sounds exactly like those after high-school hours I spend making profile pages, downloading tunes, chatting LoLzzZz and dress up dolls.With the clean and styled Internet-pages I spend most of my time at now, I almost forgot how heavy coloured, spacey and cluttered the internet was when I grew up. As Molly explains on her Instagram: ‘I wanted to make a game that really captures how it felt to go online as a teen and how hard it is to find those spaces now, how online spaces shape our memories and just how much is forgotten or erased!!!‘” 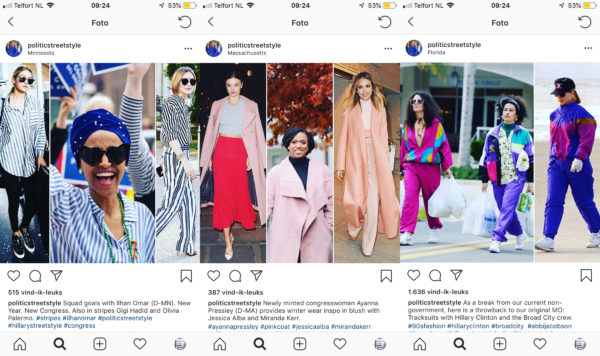 “One of my favorite Instagram accounts is @politicstreetstyle. With the growing number of young, female politicians in the government of United States come new fashion icons. But as @politicstreetstyle shows, not only the young and upcoming are shining in their outfits. Justice Ginsberg, Hillary Clinton and Michelle Obama are featured as well. The account mixes politics, fashion and popular culture by posting the political icons next to actors, models, musicians and other stars. And sometimes, the influencers follow the politician: you rock that tracksuit Hillary!” 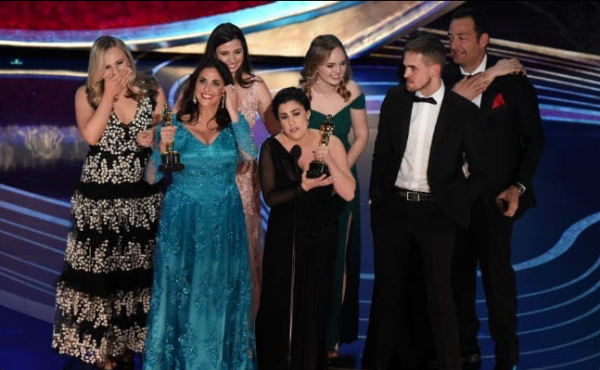 “The Oscars are always a source of smashing, controversial and/or interesting images. My favorite this year is this picture of the team behind the production that won the Award for ‘Best Short Documentary: ‘Period, End of a sentence’. This 26 minute documentary revolves around women in India, battling the patriarchy to manufacture cost-effective sanitary pads. ‘A period should end a sentence — not a girl’s education.’ is the tagline of the documentary and was the closing quote of the acceptance speech. The fact that this film, made primarily by women and about a topic that still lots of people find ‘icky’, won this award says something about the way talking about periods is more and more accepted. As it should be. In the words of 25-year old Iranian American director Rayka Zehtabchi: “I’m not crying because I’m on my period or anything! I can’t believe a film about menstruation just won an Oscar,” You can watch the acceptance speech here.”